A comparison of SEO vs Google Ads 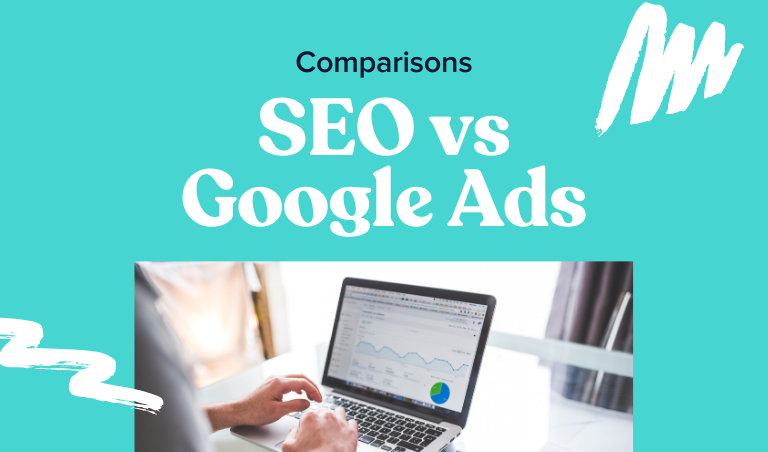 SEO vs Google Ads: It is the big, debate everywhere, and everyone seems to fuel it with their own hard, opinions and brash tips and tricks.

Before we jump in, Google Ads and SEO - short for search engine optimisation - are two separate ways to boost your online presence and get your website, content, or business out there to thousands of potential leads, customers, and people.

They're different in the fact that SEO is all organic, meaning that you have paid for none of your clicks, leads, or customers directly, and that you have used the very best parts of your brain to formulate a great website with great descriptions and titles to impress google enough for it to go: "hey! i like this website and many of the pages inside it - let me show it to more people!"

Google Ads on the other hand is PPC (pay-per-click), with you setting a budget where google places your created ad into an auction-like arena where your ad and others metaphorically battle it out to rank top. The winners are always those who set the right budget, but above all, have the most high-quality and relevant ad out of the bunch. The ads that win are placed at the very top of every keyword they won the battle in, always placed above your organic results where the SEO comes to place.

Now that thats clear, maybe you can begin to ponder the most common of questions: "which one is better?"

Don't get worked up in that question - its a whole battle in itself: you don't need to go there.

So okay, let's put the size of the business aside for a minute and imagine two businesses are competing in the same sowing industry: one company is called SowingCo, and the other is called KnitForU. Now, SowingCo detests the idea of spending money on ads, so they use SEO alone, while KnitForU decides to listen to those pesky blogs about how SEO is dead and decides to choose Google Ads exclusively.

SowingCo finds that they have to put in a lot of effort to really push for good SEO, and the task ahead is daunting, especially when those Ads hang right above the organic rankings. However, after a few months, their website begins to rank higher and higher and they begin producing leads. Now, they sell sowing products, which don't sell for too much, so SowingCo doesn't even have to worry about the cost of these leads because they're all organic (for now). They pump in some SEO work, and boom they're beginning to make money. So far - they're very happy with SEO!

Now, there is KnitForU rustling through the endless steps to set up their Google Ads and then suddenly: boom - they do it. they've set up their account, made a campaign with various ad groups, with plenty of great ads, and the Ads begin popping up instantly. They see how they get quick results, and they notice SowingCo just beneath their ads. They are very happy with Google Ads bringing in their targeted leads, being above SowingCo.

KnitForU notices how expensive their Ads are in comparison to the price of their products and begin to worry about their ROI (return on investment). They're making a profit, but they've heard SowingCo doesn't have to spend much money at all on their leads. They also begin to notice that their brand name is completely overshadowed by KnitForU in the organic ranking. They brush it aside because their Ads still run at the top of the screen.

SowingCO now taking over the organic rankings, are over the moon. Business is well and they have put SEO on this grand pedestal they keep recommending to all their business friends at their annual Christmas party, much to everyone's distaste. They notice, however, it is very hard to maintain. It's getting more and more time consuming and content creation is getting harder as the bowl of ideas runs dry. Soon, SowingCo begins to drop in ranking simply because they are struggling to manage it all and they realise truly how inexperienced they are. So, they hire somebody for their SEO. Happy days, right? Well - no. the reason they didn't want to use Google Ads is because of the cost and now look at them: paying an entire wage they can barely afford just to maintain their organic ranking. They also found that it took too long to start wielding results, but they brush that aside because it's been a few months now and it's fine - they like to say.

Both companies realise that there are pros and cons of both, and in the end, they settle for a good blend of both. They find that their leads fluctuate from time to in both categories, but SowingCo can now relax their SEO, gaining a boost from Google Ads, and KnitForU recaptures their top rank for their brand name and the mixture of organic and Google Ad sales help soften the ROI, giving them a long-term hold on their online future.

You see, even that example isn't a solid one, because it requires a small/large business to find what works best for their industry, size, and capacity. but whatever you do, don't put one aside for the other. This isn't a debate, but more of a misunderstanding between two sides. SEO isn't dead, and Google Ads isn't unnecessary. They have their pro's and cons, just like anything else

Alright - we'll drop the scenario for some proper facts and points you may seriously consider when finding your sweet blend between Google Ads and SEO. For example, did you know that 72% of marketers on the Internet state that SEO is the most effective tactic for content marketing?

In fact, let's list some pro's and con's down below, just so we can grasp the facts which people may point out and either praise - or hate about both Google Ads and SEO.

Maybe eventually you'll form your own harsh, brash opinions on which one you believe is best and argue endlessly till you collapse; but one thing is for sure: don't brush one or the other off, even if one aggravates you to the core. You'll quickly realise that using the two in cooperation yields great results. You may see that one does better than the other, but that is no reason to throw the lesser away.

I go back to my first point: it's subjective, and there will always be a different answer for different businesses,

Here's a blog about Google Ads which may help with your choice: Click here!